The US’s Stealth F-22 Raptor vs. The F-14 Tomcat That Iran Still Flies

A full-scale military campaign against Iran would require the United States to destroy the Iranian air force—which to this day flies American-built warplanes. The best of Iran’s decrepit fighter aircraft fleet is the Grumman F-14 Tomcat. The Imperial Iranian Air Force purchased 80 of the powerful fourth-generation fighters before the 1979 Islamic revolution, but deliveries were halted at 79 aircraft. Additionally, Iran had purchased 714 Hughes (now Raytheon) AIM-54A Phoenix long-range semi-active/active radar-guided air-to-air missiles, which have a range of roughly 100 nautical miles.

Iran has upgraded its Tomcats with new avionics and potentially new weapons, but only a handful of their F-14s are in flyable condition, some say perhaps as few as 20 aircraft. However, other 20 Russian-made Mikoyan MiG-29 Fulcrums, the venerable Tomcat is the Islamic Iranian Air Force’s most capable fighter. In the event of a war, the F-14 would be Iran’s first line of defense against an American onslaught.

The stealthy Lockheed Martin F-22A Raptor air superiority fighter would almost certainly lead an American attack. Compared to the antiquated F-14, the Raptor is a technological marvel and is equipped with some of the most sophisticated sensors ever developed for a military aircraft.

The F-22 combines extreme stealth and sustained supersonic speed—it can cruise at just above Mach 1.8 without afterburners—with integrated avionics and extreme agility. The Raptor’s Northrop Grumman AN/APG-77 (V)1 active electronically scanned array radar and ALR-94 passive electronic support measures suite would spot an F-14 from many tens of nautical miles away before the Tomcat had any idea that an F-22 was in the vicinity.

The Raptor, having detected a flight of Iranian F-14s and given the go-ahead to engage, would likely turn toward the enemy and launch its Raytheon AIM-120D AMRAAM missile—which reportedly has a range of 96 nautical miles when launched from a conventional fighter—from high supersonic speeds exceeding Mach 1.5 and at altitudes well above 50,000ft. It would be all over for the Iranian F-14s before anyone in the enemy formation would have any idea they were under attack.

If by some bizarre circumstance the F-22 is embroiled in a dogfight with the F-14, the chances are the Raptor will kill the Tomcat unless the American pilot suffers from extremely bad luck or makes a serious error. The Raptor holds all of the cards in terms of instantaneous and sustained turn rates—which in the F-22’s case is greater than 30 degrees per second—and energy addition. The Raptor’s incredible specific excess power and sheer maneuverability combined with its new AIM-9X missiles makes it so that the odds are grotesquely stacked in the F-22 pilot’s favor. It would be like clubbing a baby seal.

The B-2 stealth bomber might be the most dangerous plane ever built and one of the most cost-effective. One B-2 can deliver the punch of an entire aircraft carrier air wing at several orders of magnitude less in operating cost and personnel according to experts.

When B-2 stealth bombers attacked Serbia on the opening night of Operation Allied Force in 1999, destroyed Iraqi air defenses during 2003’s “Shock and Awe” and eliminated the Libyan fighter force in 2011 — the attacks were all guided by highly-specialized pilots trained in stealth attack tactics.

Part of the glass cockpit in front of the pilot is one of eight displays called the Digital Entry Panel which enables pilots to check hydraulics, electronics, flight controls, environmental conditions, weapons suite.

It is like a flying computer. Pilots enter text into the computer and can input the pressure, airspeed or target for a weapon from that panel and send it. They have autopilot systems just like a commercial airliner, so they are able to maintain altitude without our having to input into the computer system.”

B-2 pilots focus on “being ready,” as they are often the first to strike in high-intensity conflict. An interesting study from the Mitchell Institute for Aerospace Studies, called “Building the Future Bomber Force America Needs; The Bomber Re-Vector,” points to a recent B-2 attack on ISIS terrorists in Libya.

Deptula, who was involved in planning and preparation for Operation Iraqi Freedom, talked to Warrior about the warzone importance of the B-2. “The B-2 is one of the most game-changing aircraft ever built…and one of the most cost-effective. One B-2 can deliver the punch of an entire aircraft carrier air wing at several orders of magnitude less in operating cost and personnel,” Deptula said.

This photo below shows the entire arsenal of a B-52 Stratofortress. 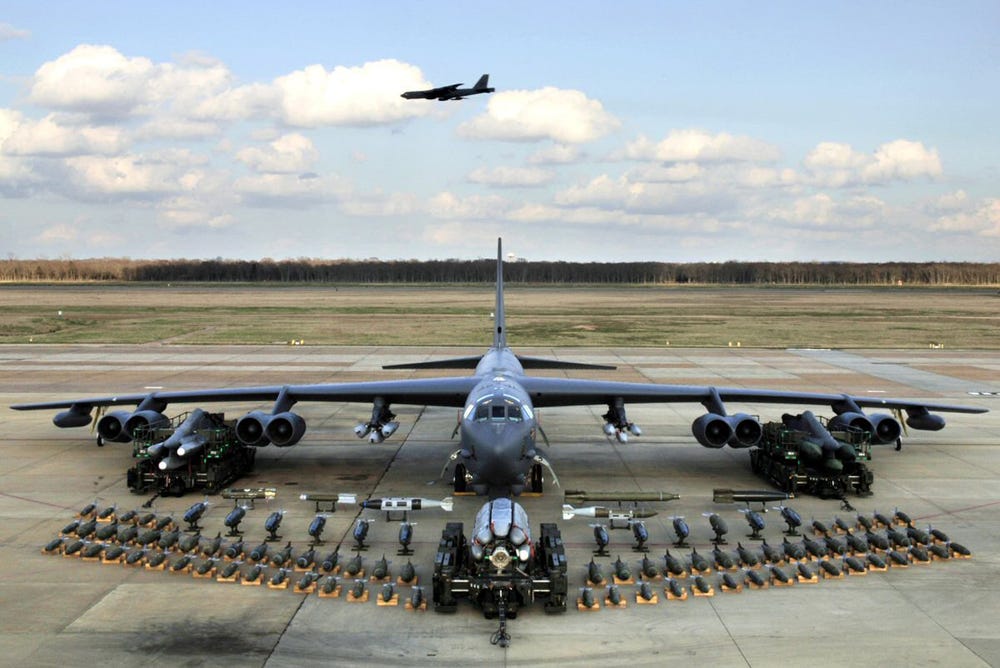